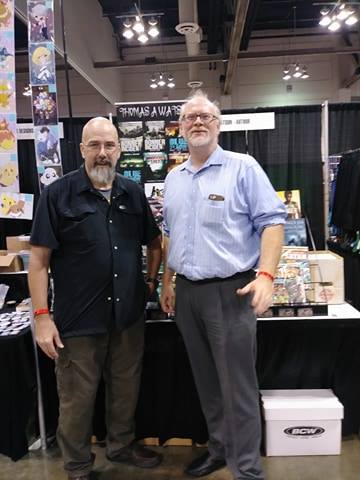 William Allen was born the oldest of four to a modest Hobbit family. Oh, wait, that’s just not true. Sasquatch family, maybe. Anyway, he grew up in the Piney Woods of Southeast Texas as part of a farming family that first came to the state before it was a republic. He started reading at age four and wrote his first short story at age eight, probably something to do with dragons and knights or some such rubbish. An avid fan of Tolkien, Heinlein and Andre Norton, he dutifully performed his chores with a paperback book stuffed in a back pocket. His policy was to always be prepared, in case he had a chance to get in some reading.

After earning a degree from Stephen F. Austin State University (“Ax ’em Jacks”), he continued to create stories for his own enjoyment but never had the courage to test the waters as a “real” writer. He scribbled and scratched his tales in longhand (something he continues to this day) before entering the computer age long after his contemporaries made the leap.

He probably would have never progressed past the dreaming phase if not for the encouragement of some truly gifted authors such as Stephen Knight, WJ Lundy, and TJ Reeder, who were kind enough to read a few chapters of an unfinished novel and urged him to get the words on paper, stupid! With this sage advice, he hunkered down and pecked away at the computer, mindful of the advice and urging he received from such notable benefactors.

His biggest supporter, though, was his father. Sam Allen was a country boy and never one to stray far from his roots. He never rode on an airplane, never finished his college degree, and was a bit of a technophobe, but he had a voracious appetite for reading and learning that he passed on to all his children. In recent years, Sam suffered with Alzheimer’s and Will knew his father’s time was close as he finished the first draft of Walking in the Rain: Surviving the Fall. In fact, this book was published on Amazon the same day as he received the news of his father’s passing.